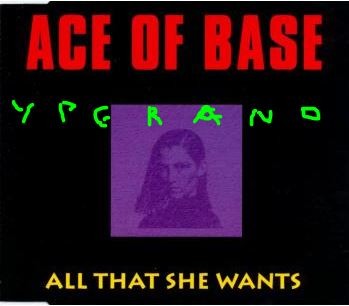 “All That She Wants” is the début single by Swedish pop group Ace of Base. The song was produced by Denniz Pop. In early 1993, the song reached the top of the charts in many countries, including Denmark, Germany, the United Kingdom and Australia. The single was certified platinum in the United States, where it peaked at number 2. It is one of the highest-selling number 2 songs of all time in the United States[citation needed]: it stayed in the top three songs on Billboard Hot 100 list for three months, but never reached the number-one position. As of May 2009, the song was the 71st best-selling single of all time in Germany. It is unclear whether the lyric “all that she wants is another baby” is meant literally or figuratively. I thought they were legit saying that the woman wanted a child???had no idea they meant she wants a boyfriend???

This is one of those songs that takes me back to the 90’s like a time machine.

Some good covers of this songs were made, including:

Be the first to review “ACE OF BASE: All That She Wants CD. 1992 Check video” Cancel reply 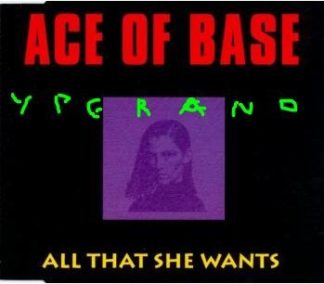