“Into the Night” was a minor hit for Frehley, reaching #27 on Billboards Mainstream Rock Tracks chart in 1987. The song was originally written and recorded by Russ Ballard (on his 1985 album The Fire Still Burns), who also composed Frehley’s Top 20 single “New York Groove.”
“Breakout” is co-written with former Kiss member Eric Carr. Whenever Ace Frehley performs this song live he dedicates it to Carr.
“Calling To You” is a re-write of a song called “Mega Force” originally recorded by the band 707 in 1982. Tod Howarth had been a principal member and songwriter with 707, and likely brought the song with him when he joined Frehleys Comet. Originally recorded as the theme to the motion picture Mega Force, the song had been 707s biggest chart achievement (#12 Billboard Rock Tracks). The “Calling To You” version by Frehleys Comet features altered lyrics, with Jonathan Cains writing credit removed and Ace Frehleys added. Interestingly, the Frehleys Comet album was released on Jon Zazulas apparently unrelated Megaforce Records.

Videos:
“Into The Night” (filmed on location in San Francisco California)
“Rock Soldiers” (shot in Toronto,Canada). 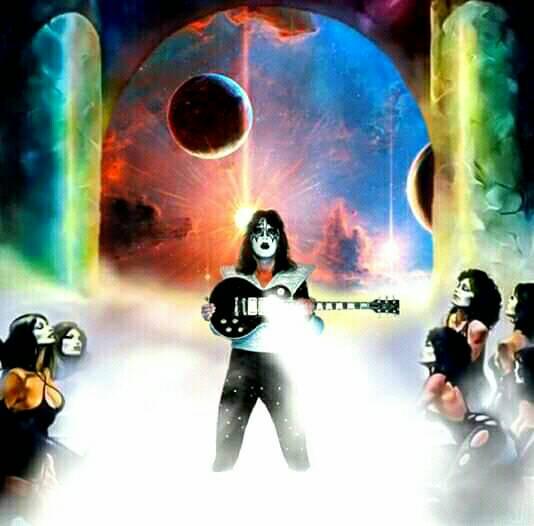 5.0 out of 5 stars Frehley’s 2nd solo LP
I could barely wait for this album to come out. Back in ’86 or ’87 when this was released, there was no internet, so the only way to keep up with your favorite bands was to read about them in the handful of rock magazines that catered to this kind of music: Metal Edge, Rock Scene, and Circus.
Like many, I was a huge KISS fan, but by the time I discovered them, Peter and Ace were long gone and the glory days of the hottest band in the world were, too. Though the remaining members had unmasked and we all knew what they looked like, Peter and Ace were nowhere to be found. I’d read an occasional story about one of them–Peter’s guest appearance on a Black n Blue album or Ace Frehley endorsing Washburn guitars, but there wasn’t much else.

I had heard that Ace had formed Frehley’s Comet and was recording a new album, but that had gone on for years & years. Every time I went to the local record store (they really were “”record”” stores back then) I’d look for this album, and finally one day it was there. I was totally thrilled.

Joining Ace in the band were Tod Howarth (who apparently worked with Cheap Trick for a while), Pat Regan (who now produces albums), and veteran drummer Anton Fig (who has recorded with just about everyone at this point, including most of Ace’s solo work). Howarth provided the more commercial side of the band (on tracks like “”Calling to You””), and Ace’s tunes sound pretty much like his ’78 solo album.

Howath is a decent vocalist & clearly has a better range than Frehley, but I (and probably many others) would have preferred an all-Frehley album. This ends up being half Frehley, half Howarth. But hey, for a guy who waited so long to hear this album, half Frehley will do.

===========================================
5.0 out of 5 stars Ace’s first outing is blisteringly good!
After 5 years, Ace emerges from out of nowhere to deliver a surprisingly good album. Frehley’s Comet has its highs and it has its lows but overall the album is what we would expect from Ace after his fabulous 1978 KISS solo album. Rock Soldiers is Ace’s explanation of what eventually drove him (literally) over the edge–his nearly fatal 1983 car accident. This is easily my favorite post-KISS Ace song. It has fantastic guitar work and actually is kind of a nifty story. Breakout has that Loony Tunes thing at the start that has always amused me. Ace’s great rhythm section backed by Anton Fig on the drums really shines on this track. Into The Night is a testament to the seedy nightlife that I’m sure Ace has experienced firsthand. Something Moved has a creepy beginning and a great vocal by Tod Howarth. We Got Your Rock is the sort of rock anthem that KISS was doing in their heyday a la Shout It Out Loud. Frehley’s Comet marked the return of Ace Frehley, who virtually disappeared from the music scene after leaving KISS in 1982. The album is a firm reminder that Ace could really play and it was nice to see him working again because he was the most underrated member of KISS. My only complaint is why did Ace feel it was necessary to hire another vocalist? He is more than capable of handling a microphone and Tod Howarth, though a fine singer in his own right.

5.0 out of 5 stars Ace Frehley is the last of the true originals.,
When Ace Frehley left Kiss,everyone knew something was missing,it became obvious that Ace WAS Kiss,then after creative differences with Gene and Paul,Ace wanted to go back to the basics,straight out ROCK. because of contractual obligations Ace wasn’t able to release his solo album right away,and fans began to grow anxious for some Ace. 1987 saw the release of Frehleys Comet, power rock at its best.
1.Rock Soldiers 9/10-Ace’s anti-drinking anthem
2.Breakout-8/10-Ace’s bandmate Tod Howarth sings this one
3.Into The Night 10/10-The BEST song on here
4.Something Moved 7/10-Tod Howarth’s best song
5.We Got Your Rock-9/10-An instant Ace classic
6.Love Me Right 10/10-Ace truly jams on this one
7.Calling To You 7/10-An anthemic song from Howarth.
8.Dolls 6/10-Catchy but not rocking enough.
9.Stranger In a Strange Land 8/10-Simple,memorable
10.Fractured Too 9/10-A worthly sequel to Ace’s original “”Fractured”” from his solo masterpiece in 1978.