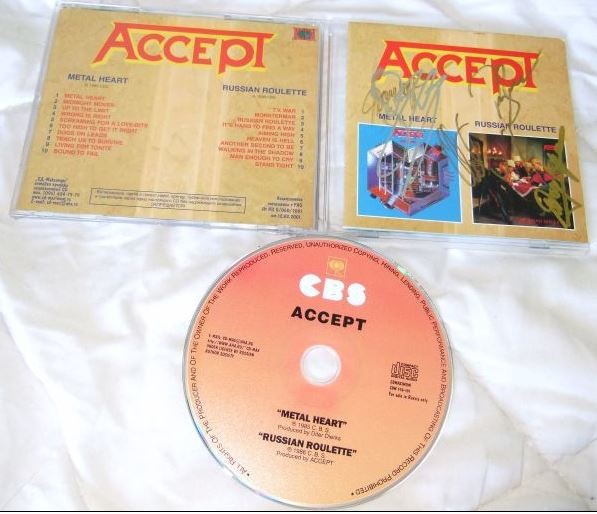 Metal Heart is a 1985 release by German heavy metal band Accept. Today Metal Heart is often considered by fans as one of the bands best records.
It contains several of their classic songs such as “Metal Heart” and “Living for Tonite”. The band also makes a detour into jazz territory with the unusual song “Teach Us to Survive”.
Wolf Hoffmann explained the concept behind the album: “We had read an article that someone was working on an artificial heart and that one day everybody is going to have a computerized heart. It talked, in general terms, about how more and more of humanity gets sucked out of the daily life and more and more replaced by machine. Humans versus machine, was the general vibe of the record.” Fittingly for the futuristic theme of the album, Metal Heart was the first Accept album to be recorded digitally.
Wolf recalls Dieter Dierks as a very demanding producer: “We would do some pieces several dozen times trying to capture what he had in his mind for a specific section,” adding: “Each song we tried different combinations of guitars, mic’ing and even strings!”
The song “Metal Heart” is well known for containing the cover of two famous classical themes: Tchaikovskys Slavonic March (in the intro) and Beethovens Für Elise in the main riff and solo. This song was covered in 1998 by Norwegian Black Metal band Dimmu Borgir. “I had no idea it would become as popular as it did,” Wolf remembers of his contribution to the song.
“Midnight Mover”, about a drug dealer, is one of the more commercial songs on the album and was selected for a memorable music video that anticipates the bullet time filming technique by a full decade. “Just ahead of our time again!” jests Wolf.

With 1985s Metal Heart, German metal institution Accept attempted to add catchier choruses and melodies to their high-octane guitar riffing in a clear ploy to crack the American market. Not that this move in any way upset the balance of their thus-far smooth-running metal machine, which had been gaining momentum with every release since the start of the decade. No, Metal Heart was certainly a step toward accessibility, but a cautious one at that — and, frankly, there was no toning down when it came to the lacerated larynx of gifted lead screamer Udo Dirkschneider. You gotta hand it to Accept, they sure knew how to make an entrance by now, and the apocalyptic title track is about as dramatic as it gets (the operatic “Bound to Fail” comes close), with guitarist Wolf Hoffman taking the helm on a long, mid-song solo excursion containing equal nods to Beethoven (very nice) and Edward Van Halen (get real). First single “Midnight Mover” is next, and along with the even more melodic “Screaming for a Love-Bite,” it places obvious emphasis on hooks and melodies (and proved to be the toughest to stomach for the bands more hardcore fans). But despite another strange detour into jazz territory with the bizarre “Teach Us to Survive,” Accept still packed amazing power, heaping on their Teutonic background vocals for the ultraheavy “Dogs on Leads” and gleefully pile-driving their way through relentless moshers like “Up to the Limit” and “Wrong Is Right.” The brilliantly over-the-top “Too High to Get It Right” finds Dirkschneider screeching like never before, and to cap things off, the band really cooks on “Living for Tonight” — arguably the best track all around. A winning set.

Russian Roulette is a 1986 release by German heavy metal band Accept. It was again recorded at Dierks-Studios, but the band chose to self-produce rather than bring back Dieter Dierks as producer. It would be the last Accept album to feature Udo Dirkschneider as lead vocalist until the 1993 reunion album Objection Overruled.
The album returns Accept to the darker, heavier sound of releases prior to the more commercial-sounding predecessor Metal Heart. Wolf Hoffmann explained the bands decision: “Maybe we were trying sort of go back to our natural and not polished Accept sound with that record. We weren’t really all that happy with the polished and clean-sounding Metal Heart. I was sort of very happy with my guitar playing on that record and very happy with my parts, but I remember the whole vibe of the band was at the time that we don’t want to go through this again with Dieter Dierks who had produced Metal Heart.”
Peter Baltes explained the albums title and front cover as an expression of the strong anti-war themes throughout the record, showing war as a game of Russian roulette: “It means – go and play the game yknow, what a silly game it is. One will die definitely.” 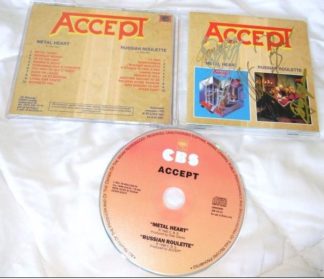