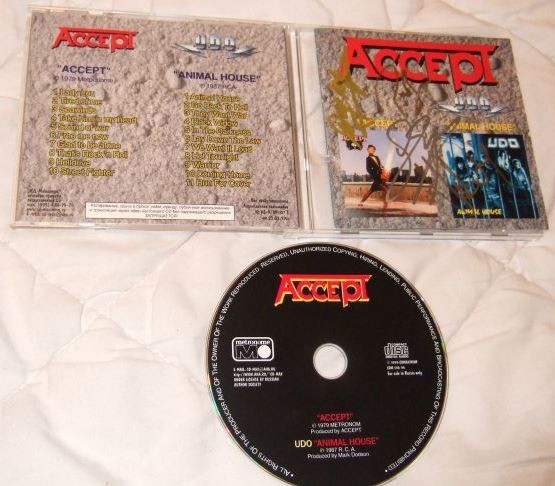 Accept is the self-titled début album released by the German heavy metal band Accept. It was recorded in 1978 and released in early 1979 on the German label Brain Records. Drums on the record are played by Frank Friedrich, but he chose not to pursue a professional music career and so his place was taken by Stefan Kaufmann just prior to the albums release. Bassist Peter Baltes performs lead vocals on “Seawinds” and “Sounds of War”.
Guitarist Wolf Hoffmann later remembered the debut as simply a collection of songs the band had worked up over the bands formative years, with no real focus for the band yet: “We were just playing songs that we had always played. It was material that had gathered up over the first few months and years of our existence and it was a mixture of all kinds of stuff.” He also recalls it selling around 3,000 copies. Lead vocalist Udo Dirkschneider expressed dissatisfaction with the groups first effort looking back on it: “Naturally, it was very exciting for us the first time we entered a recording studio but also disappointing at the same time.” Accept would gain better production values and a more cohesive direction on future releases, but the debut was an important early step that gained them the ability to play the neighbouring countries of Belgium, The Netherlands and France for the first time.

Animal House is the 1987 debut album from U.D.O. after Udo Dirkschneiders departure from Accept. It was recorded August-October 1987 at Dierks Studios, Cologne. It charted #41 in Sweden.
The performance of the song “Lay Down the Law” is credited to Accept and U.D.O..
Pulheimer Kinder- und Jugendchor contribute vocals to “They Want War”.
In some releases a picture of the tour band including Dieter Rubach and Andy Susemihl was featured in the booklet. The album cover shows the line-up that recorded the album. An “Animal House” Tour followed in early 1988. During this time they also did tours with Guns N’ Roses, Lita Ford and Zodiac Mindwarp. After Rubach left the band, they supported Ozzy Osbourne on all European dates in 1989. 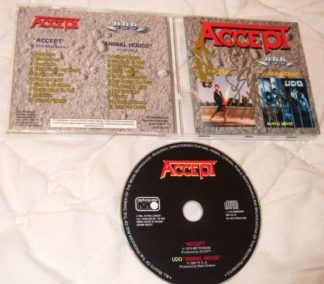