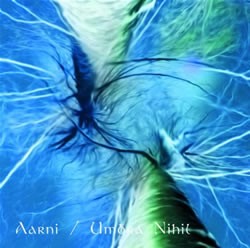 Aarni sound like a mix of Skepticism, Deinonychus, Unholy, Evoken, Esoteric,
Funeral, dISEMBOLWEMENT, Winter, Thergothon, with Folk and Prog
rock. Their influences go from Finnish Folklore, Paganism and the occult to
Parapsychology and psychoanalysis, to Lovecraft and Mythology. The band
say they often get described as, “”almost orthodox doom metallish
Lovecraftian-Jungian Kalevala avant-garde music””. Their lyrics are in Finnish,
but they also have lyrics in French, Latin, English, Swedish and even Ancient
Egyptian! You will get lost into the quicksand of despair that is Aarni. They
offer too much in their music, yet they often sound almost simplistic.
Their music never overwhelms you, but always surprises you. Expect the
unexpected, expect heavy funeral doom, expect experimentation, expect
gentle open progressive sections, mesmerising dreamscapes, expect to
drift away, expect songs that aren’t songs, expect a medieval feel, a futuristic
feel, expect simple tunes, expect complexity, expect well. anything!
It is haunting, doomy, bleak, heavy, oppressive and soul crushing. But it can
also be mellow, uplifting and have a childish innocence about it.
Umbra Nihil offers us nihilistic monotonous doom, but with a bizarre melodic
element. Umbra Nihil sort of reminds us of early Katatonia mixed with some
sparse elements of early My Dying Bride. Their music is much more catatonic
and nihilistic though. While the music can be fairly melodic, it always
remains slow and bleak, making sure that the experience of doom lasts.
Everything has been down tuned and even the grunts sound as if they are
coming from some lower plane of existence. The more melodic sections
however keep the whole from being pure depression. As such creating a rather
odd situation, low down doom that hovers in a state of eternal limbo.There are
moments when the band sound very close to Aarni. Both bands have that odd
vibe around them] CD