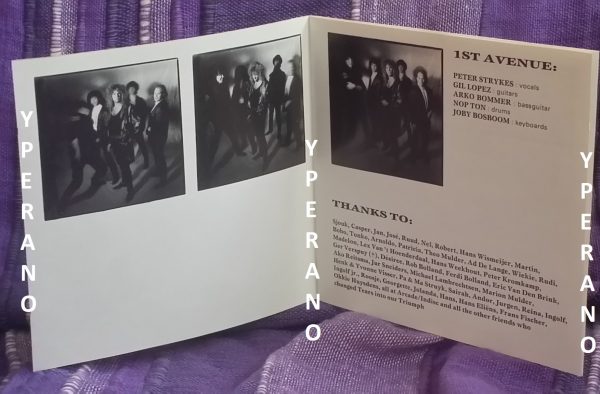 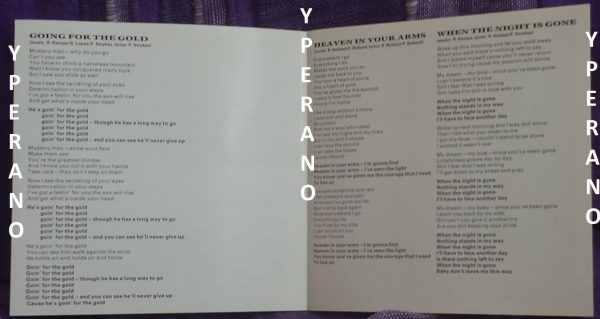 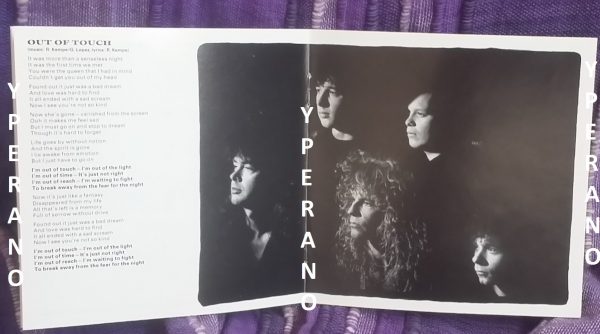 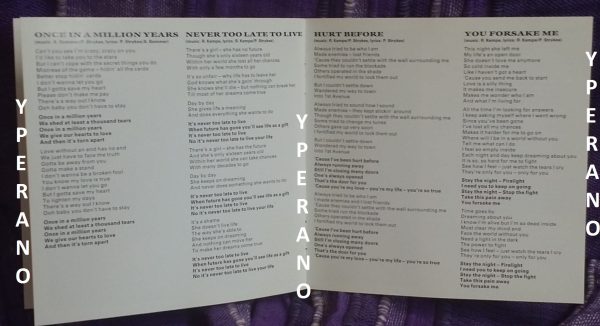 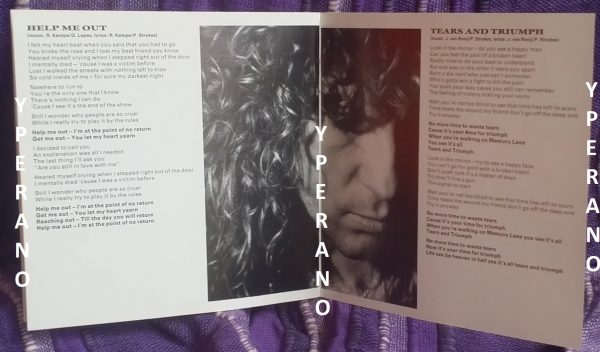 CD 1ST AVENUE – TEARS AND TRIUMPH! Excellent AOR from the Netherlands, released on the INDISC RECORDS label back in 1992! CD and inserts are in very near mint condition. Very hard to find nowadays, this one comes highly recommended!

Most songs were written and arranged by Robby Valentine. Keyboard-driven melodic hard rock is the strong point of 1st Avenue. While you may not discover any symphonic Queen-influenced songs like in Valentines solo albums, “Tears And Triumph” is a comprehensive set of beautiful tunes, ranging from uptempo hard rock, midpaced smooth songs, and passionate ballads.

Several outstanding songs that made this album shine are the extravagant guitar touch on “Out of Reach/Out of Touch”, the late-80s Europe style of “Never Too Late To Live”, the uptempo blissful melodic rock of “You Forsake Me” and “Help Me Out”, and two sensational ballads, “Heaven In Your Arms” and “Once In A Million Years”. “Going For The Gold” has a dark atmosphere and dominated by keyboard, but its still a heavy rockin’ tune and pretty good one. Peter Strykes vocal fits the music very well, Gil Lopez’ guitarworks are thunderous and harmonic at the same time, Joby Bosbooms keyboard is another highlight of the disc. Some says this is very similar to Scandinavian bands such as Skagarack, Treat, while I also think they’re also very close to bands like Atlantic and Zinatra, so if you’re into that kind of music, this is purely heaven for you.
———————————————————
One of the greatest melodic cd s. Truly one of my favourites (out of 2000 cd s). Great vocals, nice keyboards. I recommend this one to all aor/melodic rock fans. You want be disappointed. The second one is also a great disc.
———————————————————-
Truly one of THE BEST melodic rock albums of all time! This cd has everything!! Power, melody, heart….I just can’t say enough! BUY THIS CD!!!!
———————————————————-
THIS CD IS REALLY GOOD. AOR OF HIGH QUALITY AND NO WEAK SONG.ITs A PITY THIS BAND BROKE UP. AT LEAST THEY LEFT THIS GEM FOR US. 10/10 .
———————————————————-
A varied album throughout, and certainly high on power and energy, while grandiose streaks of piano and synths literally pepper itself all the way through. In the main, there is a definite Europe and Magnum influence, and an overall European feel rather than American. Air keyboardists need to listen to songs like ‘Going For The Gold’, ‘When The Night Is Gone’, and the fabulous ‘Out Of Reach/Out Of Touch’, featuring the wonderful piano/synth introduction which takes all of 3 minutes!
———————————————————-
I love this album Great songs, great Keyboards, Great vocals.
———————————————————-
Got to agree that this is a rather excellent album. Much better than the follow up and a great, consistent melodic hard rock release. Great stuff!
———————————————————-
If you love Robby Valentine/Zinatra then this is essential. Huge keyboards and great songs.
Great CD with great vocals… 10/10
———————————————————-
good solid melodic aor album.plenty of keys.good vocalsand the track once in a million years is brilliant.a must buy.
———————————————————-
It rocks! Very similar to Robby Valentine and Zinatra. Whole cd is great the whole way through. Tears and Triumph is a excellent song. If you like catchy songs, booming drums, and lots o keyboards this is a must have. Peter Strykes has an excellent voice and it fits the songs perfect.
———————————————————-
Oh my fucking god.. what a super CD!!!! :”Once In A Million Years” SUPER BALLAD!!!
“You Forsake Me” this is superb energy song. “Once In a Million years” this is not ballad and very good AOR song alla.FM. I have this cd.Super and Best fav.no.1. My Best Album is:SHY – “Excess all areas”,TNT – “Intuition”,WHITE WOLF – “Endangered Species”,ROXUS – “Nightstreet”,DOUGLAS – “Mad”,FIFTH ANGEL – “Time will tell”,KHYMERA – “Khymera”,MI.LLI.ON – “No.1”, SHOTGUN SYMPHONY – “s/t”,TREAT – “Dreamhunter” This is my 10 fav. and this album no.1
———————————————————-
This is a class album somewhere in between SKAGARACKs “s/t” (Keys), TREAT to “Dreamhunter/Pleasure princible” times (“When the night..”) & GLORYs “Danger in this game” (powerful guitarwork).I think due to its Scandi AOR overall sound. The very sweet keys, the mix of the songs with e.g. the extraordinaire instrumental of “Out of reach” & the same for the production makes it a 9/10
———————————————————-
Very good AOR and much better than his second release, lot of keybords here has i expected.recommended
———————————————————-
Fantastic album ! I have been listening to this one over and over again this weeekend and it got better each time. This is how I love my music !!
BRILLIANT 10/10
———————————————————-
“Once In A Million Years” and “Tears And Triuph” are simply KILLER AOR songs! “Help Me Out” “Go For The Gold” and “When The Night Is Gone” also get honorable mention.
Brilliant! A masterpiece of this kind of music! 93/100
———————————————————-
Now I can kick myself and pull all of my hair out for ignoring this gem.
Here is the debut from this band and it is first rate, highly polished AOR considered by many collectors to be “Classic”. Featuring songs written and arranged by Robby Valentine, you’ll hear excellent keyboards and choruses that will bring tears to your eyes…..I compare their sound to early ROBBY VALENTINE, ZINATRA, TREAT and ATLANTIC. This is pure listening pleasure to my ears…….
———————————————————-
Great album with great musicians and great compositions..do i have to add more???…”Intro/Going For The Gold” is a perfect mix of a dark, gothic intro and an excellent AOR/Hard Rock track,immediately we are hit by a very nice ballad “Heaven In Your Arms”,”When The Night Is Gone” along with “Once In A Million Years” and “Tears & Triumph” are my favourites..”Out Of Reach/Out Of Touch” has also a killer piano intro and then leads to a very good song and “You Forsake Me” is a solid one.As everybody knows Valentine was involved here and of course enriched the quality of the songs a lot (well the ones he did) but this ain’t discrediting the bands own written and composed material.Buy and enjoy.91/100